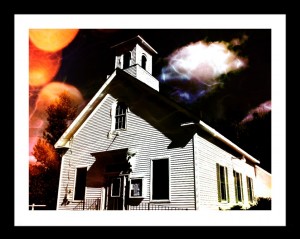 Just days after authorities said Reggie Griffin’s story of Bobby Maxwell’s disappearance was false; he was beaten up at Lincoln School. The Principal, Jake Thompson, said the incident evolved from students being upset that Griffin had revived the mystery and everyone got upset.

According to Thompson, at recess a week ago Tuesday, Reggie was approached by Willy Anderson and an argument evolved, ending with a fight between the two. Sam Wilson, a teacher, stopped the skirmish.

“Apparently tempers flared after words were exchanged about Reggie’s statements and Willy took exception. I broke it up quickly, but Reggie got the worst of it,” said Wilson.”

Maxwell, 10, disappeared last Halloween after a party. Most of his schoolmates said they liked him. He was never seen again and his body was never found.

Chief Biff Jacobs said that the Griffin boy, who was having school problems, had probably made up the story to look like a hero so his parents would overlook his poor grades.

“Reggie should not be talking about Bobby,” Tiffany Jones, 11, said, echoing some of Maxwell’s classmates.

The school did not think any discipline would be necessary for either boy in the fight. “Boys will be boys sometimes. I don’t think it’s serious, but some of Bobby’s friends were upset about what Reggie did,” said Wilson.