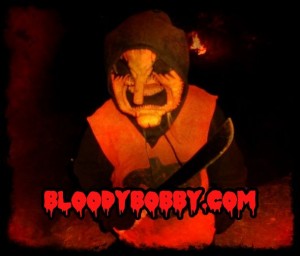 Welcome to Bloodybobby.com. A site dedicated to the urban legend of Bloody Bobby Maxwell. Explore the photos and news articles that we have found in our research of the evil secret of Fall Creek Valley.  It has been just a few years since the Fall Creek Valley Massacre, where 8 people were savagely killed.  We have gathered several articles from local newspapers, that track the mystery of “Bloody” Bobby Maxwell.

The Legend started over 20 years ago when the town of Fall Creek Valley was rocked with the tragedy of a missing boy named Bobby Maxwell.  He disappeared on Halloween night with out a trace of what happened to him that night.  Months, turned to years and finally the search was over, and the memory faded.

But 20 years later in Fall Creek Valley on Halloween night, 8 people were brutally murdered.  Police investigated the murders over several months.  The only connection the murders had to one another was 6 out of the 8 victims, were former classmates of Bobby Maxwell, and were the ones who last who saw Bobby that Halloween night 20 years prior.

Since the Fall Creek Massacre, the legend of Bobby Maxwell grew.  People reported seeing a child in a orange and black Halloween costume walking the streets of the town late at night.  Also people reported black pumpkin markings found all over the town of Fall Creek Valley.  All the sightings have had one thing in common, they all seem to be reported on Halloween night.